On his form this year, and with the hype starting to circle, Eastern Ranges forward Tom Boyd is looking increasingly worthy of the first pick in the National Draft in November.

The 17-year-old key forward has been one of the TAC Cup’s most dominant players, kicking just under five goals a game, and his presence, size and marking ability in the forward 50 makes him one of the most sought after prospects in the draft. The season to date from the GWS Giants, however, leaves them in prime position to pick up Boyd at the very start of the draft, sitting two wins below the Bulldogs and Demons in 16th and 17th respectively, and in a difficult position to regain that lost ground.

They already have Jeremy Cameron and Jonathan Patton on their list, currently. Cameron has kicked 33 goals this year, ninth in the Coleman Medal, and Patton is regarded to be as talented but with an unlucky injury history hindering his two seasons of AFL so far. Also worth considering are the highly regarded Kristian Jaksch and the promising Adam Tomlinson.

This is without being speculative of Lance Franklin’s future, who still remains every chance to join the Giants via free agency, which would either create a very tall forward line or force someone of Cameron’s ilk down back, as unrealistic as that could seem.

So do the Giants need Boyd? Not really. Nor do the Demons who, on current standings, would have pick two, and have Mitch Clark, Jesse Hogan, Chris Dawes and Jack Fitzpatrick already doing enough.

It’s a complicated case. Boyd is no doubt worth pick one, as very good key forwards are difficult to find, and often worth the high pick one pays for them.

So do the Giants then offload their first pick?

Right now, their priority would be seeking mature AFL players, something they desperately lack – defender Stephen Gilham was their most experienced player in their last match against North Melbourne, with a mere 109 games under his belt. Above him sit Bret Thornton, Dean Brogan and the now-retired Chad Cornes, the trio combining for six games this year.

Having the first pick in the draft is a high price to pay, whether through finishing last or acquiring it off the team that does. The Giants can very well make a play for someone of a very high calibre, especially considering they also have a mid-first round pick to enhance any offer, given they’ve stated their draft picks are on the table.

The question is whether anyone is willing to pay a high price as well.

Quality key forwards are rare, so naturally there are teams on the lookout. Western Bulldogs and St Kilda, currently holding pick three and pick four respectively, could package their first-round pick with an experienced player to guarantee themselves Boyd.

Brisbane will come soon after in the draft stakes, and with Jonathan Brown aging, could also be highly interested. Fremantle have also looked at key forwards such as Franklin and Clark in the past, especially with captain Matthew Pavlich still injured, and no standout replacement bursting onto the scene.

But would these teams give up the high price necessary?

In the past ten drafts, a top five pick has only been traded five times. Three of those situations involved mini-draft picks – Hogan to Melbourne, and Jack Martin and Jaeger O’Meara to Gold Coast – and a fourth was a complex exchange between the Suns and Lions, involving three first-round picks and Rohan Bewick.

The other one was Chris Judd’s move to Carlton. They knew an experienced midfielder – and captain – was a top priority, and were gutsy enough to trade picks three, 20 and current Coleman leader Josh Kennedy for him. Judd then made the All-Australian team four times in a row and won both a Brownlow Medal and an AFLPA MVP, leading Carlton to three successive finals appearances.

Teams like the Bulldogs or Saints don’t have Judds to put up on the trade table – the closest comparisons are Ryan Griffen, who will remain with the Bulldogs, and St Kilda captain Nick Riewoldt, happily contracted until 2014. But they do have players on levels below, and in tandem with the top draft picks both teams will possess, they would be the leading candidates.

It isn’t unrealistic to suggest GWS could look at proven players such as Nick Dal Santo and Adam Cooney, 29 and 27 respectively, and see an immediate improvement in both their current midfield and future development. There is a raft of similar players who could be of a similar benefit throughout the league, and as it is their No.1 pick, they call the shots as to what seals the deal.

Time will tell, but perhaps, much like West Coast and Carlton post-Judd trade, both GWS and a side willing to do the deal would ultimately find a benefit.

Cristian Filippo - 3 April, 2014
0
When the teams come around tonight for this round’s action, Fremantle’s changes will at the very least read: ‘Out: M.Barlow (injury), N.Fyfe (suspension), Z.Dawson...

The Lodgebook: My hero, Oscar 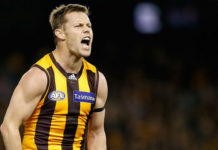 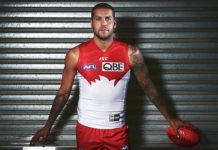