Season so far:
The Coburg Tigers, in their final year of the alliance with Richmond, have endured an inconsistent first half of 2013 being unable to string together consecutive wins. The Tigers three wins have come in round one against Sandringham, round five against Essendon and round eight against Bendigo, leaving them two wins outside the top eight. Coburg have been heavily reliant on their Richmond-listed players, with captain Nick Carnell flying the flag for the VFL listed players. A win before the bye against Bendigo was followed up by a defeat to Collingwood last weekend, demonstrating Coburg’s inability to string consecutive wins together. However, the Tigers will want to end their alliance with Richmond strongly in the second half of the season, as Richmond moves to a stand-alone VFL team in 2014.

Big Improver: Liam McBean
The beanpole teenager has been the surprise packet for Coburg this year, booting 19 goals in seven games. The Richmond listed forward/ruck was selected at pick 33 in last year’s draft, recruited from the footy factory that is the Calder Cannons. At 203 cm and 84 kg, McBean is still very raw but his ability to play below his knees and kick crumbing goals have been quite unusual for a player of his size. A favourite of development coach Mark ‘Choco’ Williams, McBean will be hopeful of playing senior footy at some stage in 2013.

Biggest Slider: Tom Derickx
After being recruited from Claremont as a 22 year old in 2010, Derickx has failed to live up to the potential that he arrived with back in 2010. After a couple of injury-ravaged seasons, Derickx was able to put together a complete season 2012 in the VFL, and even managed to play two AFL games. One of those games was against the Gold Coast, which saw Derickx turn the ball over at a crucial stage late into the match, and the direct result of that turnover was Karmichael Hunt’s match winning goal. Derickx has not played since playing in the VFL all of this year, and without setting the world on fire he has fallen down the pecking order at Richmond for talls. Maric, Vickery, Stephenson and even McBean have all gone past him, which means Derickx’s career as an AFL footballer is at a knife’s edge.

Second half preview:
The Tigers have a tough run home, with games against all the current top eight sides bar Williamstown, plus road trips to Bendigo and Frankston. The Tigers have winnable games against Frankston, North Ballarat and Bendigo, but it would be hard to see them making the final eight. With massive financial struggles, Coburg will want to string together some wins to raise the supporters, members and sponsors confidence in the club going into season 2014. A huge second half of the season is required, with both Coburg and Richmond intent on finishing their alliance on a high.

Scott Barby - 10 March, 2014
0
Story Of The Summer Like Collingwood the Cats felt the need to make the tough call on a few favourite sons in order to rejuvenate... 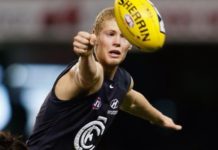 Digging the Boots in