Week two of VFL finals action saw the Essendon Bombers bundle the reigning premier, Footscray, out in straight-sets and Sandringham overcome an early deficit to overrun the Magpies by just seven points.

Essendon continued its successful finals run over the weekend with a 66-point win over reigning premiers Footscray.

Kicking with the breeze in the first quarter Essendon secured a seven-point lead, but cemented their win by kicking eight of the next nine goals. Essendon were never challenged after half-time and used the rest of the game to capitalize on their lead.

Aaron Heppell was a solid in defence with Anthony Tipungwuti, with the duo impacting on a number of contests across halfback. Heppell had waited all year for the opportunity and used the last four weeks to cement his spot in the team.

Kyle Hardingham and Shaun McKernan used their AFL experience to help the Bombers to their first preliminary final since 2005 when aligned with Bendigo.

Essendon VFL coach, Hayden Skipworth, said “The boys stuck to the game plan all day, we were disciplined for the whole four quarters and they got the result that they deserved.”

Footscray coach, Ashley Hansen said that Footscray didn’t have enough winners on the ground in their positions.

“Finals football is a collective effort. Individuals don’t win finals, teams do and we didn’t have enough winners that combined to be a strong team.”

The win for Essendon sets up a preliminary final clash with Williamstown on Sunday September 20 at 2:40pm at North Port Oval.

Sandringham overcame an early deficit to progress through to a preliminary final against minor-premiers Box Hill Hawks.

Both teams missed a handful of early shots on goal before Collingwood was able to capitalize in the second quarter and take some control of the match, entering half time with a three-goal lead.

Sandringham was able to draw level at three-quarter time before eventually hitting the front through Trent Dennis-Lane’s fifth goal at the 17-minute mark of the final term. Mitch Brown was pivotal up forward for the Zebras with three second-half goals and taking nine marks, while Clint Jones amassed 44 disposals and a goal. Dylan Weickhardt worked hard to finish with 22 disposals and seven tackles.

For the Magpies, Matt Scharenberg provided a defensive rebound while Jack Hellier and Brent Macaffer (two goals) were important through the middle.

Collingwood VFL coach Dale Tapping said the win was a courageous performance after losing Jonathan Marsh in the second quarter to a suspected hamstring injury.

“Mitch Brown got hold of us a little bit with his aerial stuff… (Marsh) has been playing on those guys at AFL level and has been doing it pretty well. That hurt us a bit.”

“We’ve continued to make really good inroads into what we want to do at a VFL level. Today is disappointing of course but we’ll reflect and I’m sure it’ll be looked upon as a reasonably positive year.” 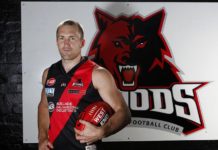 Cristian Filippo - 1 April, 2014
0
Carlton supporters left the MCG on Thursday night ruing missed opportunities. It was a feeling they would be all too familiar with, given the...

Umpires fight back against abuse