In light of Matthew Lloyd’s beyond lopsided and hilarious trade suggestion on Footy Classified, Bound For Glory News has compiled the top ten worst trades of all time. Was Lloyd’s brain on a rocket ship to the moon when he suggested a trade which would see former number six pick Chris Yarran exchanged for former number two pick Scott Gumbleton? Lloyd attempted to justify that as a fair trade as they were both top ten picks. If only Hawthorn attempted to use that logic to trade ‘magical’ Mitch Thorp for Joel Selwood.

Geelong sent Brent Prismall to Essendon for pick 39 (Steve Motlop)
The Bombers were desperate for a classy midfielder and looked to pay overs for an injury-prone depth player in Brent Prismall. Whether it was a case of looking better because of his company at Geelong or perhaps Essendon just misjudging his skills, Prismall turned out to be a butcher in his time with Essendon and managed merely 36 games due to injury and poor form. Conversely, Geelong picked up speedster Steve Motlop who is quietly becoming one of the most explosive game breakers in the league. Even though he has plenty of competition for his spot, he has managed 37 games since 2009, with most of those being played over the last two years.

Melbourne sent Cale Morton to West Coast for pick 88 (used to acquire David Rodan)
Somehow the Bombers ended up with pick 88 in a bizarre sequence of trades. In any case, Melbourne’s former number four pick essentially moved to West Coast for nothing at all. Melbourne traded pick 88 for David Rodan who has been in and out of the side. Pick 88 landed up at Essendon, who they used on Sean Gregory: an unknown talent.

10. Hawthorn traded Jonathan Hay for North Melbourne’s pick 18 (Max Bailey)
This trade is more of a miserable tale than a laughable exchange. At his best, Hay was an All-Australian calibre defender. Yet his battle with depression put a dampener on his career and he was never able to get back to his best. On the other hand, Max Bailey has had more knee reconstructions than Fat Bastard has had hot meals. Whilst he has shown he is an adequate AFL level ruckman, he was picked over such players as Andrew Swallow and Matthew Stokes.

9. Melbourne swapped Brock McLean for pick 11 (Jordan Gysberts)
Whilst McLean struggled initially at the Blues, he has re-emerged as a wonderful player. Since the end of last year, he has stepped up in Marc Murphy’s absence and bolstered a midfield that far too often has played below their abilities. Jordan Gysberts played 19 games for the Dees and so far hasn’t been able to crack into North Melbourne’s senior side.

8. Brendan Fevola and Carlton’s pick 29 (Callum Bartlett) for Lachlan Henderson and Brisbane’s pick 12 (Kane Lucas)
At the time, it seemed like Brisbane were going to break even. Daniel Bradshaw and Michael Rischitelli were originally offered to the Blues, but they knocked that offer back. Bradshaw moved to Sydney in the Pre-Season Draft and Rischitelli moved to the Suns after the 2010 season. Brisbane received Fevola, who started off well but then succumbed to a raft of injuries and the Lions were unable to stop Fev being Fev. Callum Bartlett actually looked to be a talented player but has battled injuries. On the other hand, Carlton picked up Henderson who is proving to be a very talented swingman. The whipping boy Lucas deserves some credit – he might have taken the mantle as the best spaceman since Buzz Aldrin, but he has had an excellent year in terms of sheer disposal numbers.

7. Western Bulldogs send Jordan McMahon to Richmond for pick 19 (Callan Ward)
If Callan Ward didn’t move to the Giants, this surely would have made the top three. Ward was excellent for the Dogs in his time there and looked to be the best player to come through the ranks since Adam Cooney. His current form for the Giants has been outstanding. Conversely, Jordan McMahon was anything but in his time with the Tigers. The best contribution he made during his Punt Road tenure was his seedy moustache.

6. Melbourne sent Scott Thompson to Adelaide for pick 13 (Matthew Bate)
In context this trade wasn’t woeful for the Dees. Thompson just didn’t want to stay and Bate played 102 games in a struggling team. Having said that, Thompson has been the heart and soul of Adelaide for years. Thompson has been a top 10 midfielder since moving to the Crows where as Matthew Bate’s claim to fame comes down to how easy it is to forge dirty puns with his name.

5. Sydney traded pick 31 (Simon Black) to Brisbane for Simon Hawking and Brent Green
It’s simple – Hawking and Green didn’t win three premierships, a Norm Smith or a Brownlow. Black is the most decorated player in the league alongside Jimmy Bartel, and probably the most respected too.

4. Fremantle traded picks one (Luke Hodge), pick 20 (Daniel Elstone) and pick 36 (Sam Mitchell) for Trent Croad and Luke McPharlin
Credit where it’s due to the Dockers – McPharlin is the best backman they have ever had and Trent Croad was a very good player. Of course they traded back Croad after a few years for the sensational Ryley Dunn, an absolute steal at pick 10. The Hawks really only lost McPharlin and snared Mitchell and Hodge.

3. Fremantle swapped pick 4 (Scott Lucas) for Essendon’s Tony Delaney
Well, Delaney wasn’t much chop. Lucas ended up with 270 games, 471 goals as a swingman, a Best and Fairest and of course won the 2000 premiership. Delaney contributed 28 games and 11 goals. Not quite as impressive as Lucas.

2. Fremantle traded Andrew McLeod for Chris Groom
There’s only been two players to win multiple Norm Smiths. Only one of those won them consecutively too. That bloke certainly wasn’t Chris Grooe. One year after Fremantle snared the almighty Groom, they sent him packing. McLeod played over 300 games and is considered one of the greatest half-back flankers.

1. Fremantle gave the Bombers Matthew Lloyd for Todd Ridley
Sorry Dockers, the four worst trades of all time and you’re on the receiving end of every one of them. The real riddle is who the blooming heck is Todd Ridley? Lloyd might have proposed a terrible trade. But at least there were benefits for both teams. Ridley certainly didn’t benefit Fremantle in his 21 games for the club. 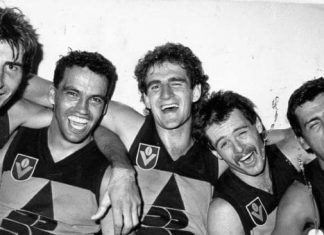 Damien Berry - 5 June, 2018
0
In the first piece of which hopefully will become a regular series, we intend to take a look back at some of the matches... 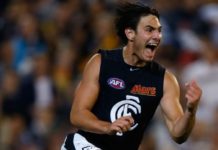