Anna Krien’s recent book, ‘Night Games’, delves into a topic which is frequently ignored in football, the incredibly conservative and misogynistic gender roles that are assigned to women in sport.

She interviewed a diverse and eclectic amount of experts and insiders, in fields ranging from law, gender psychology and sports administration. The book has received much praise for detailing the ever controversial off-field exploits of footballers, and how that stems ultimately from an environment of entitlement.

In a round marking a new frontier for women in our game, I spoke to Anna about gender in football culture, the message of Women’s Round and the controversy surrounding Stephen Milne.

Ben: When researching the book, what shocked you the most about what the ‘boys club’ got up to, and how do you think that influenced the standards they as individuals held in women?

Anna: I think the sad thing was I wasn’t shocked. I thought it was incredibly sad the stories that I heard, and the pranks that were played that were quite humiliating for the victim at the centre of them. What shocked me more was stories of the seepage out beyond clubs of this kind of vast culture of entitlement, such as police investigations where football adulation has got in the way of police allowing justice to take its course.

B: Out of the vast number of people that you interviewed, who did you think gave you the greatest or most insightful representation of what happens inside a football club?

A: I guess it would have to be Tony Wilson, who played briefly for Hawthorn and is a writer/former lawyer as well. And he straddled quite a lot of worlds and is a very amiable and honest guy.

He also never compromised his love and respect of the game, and I really appreciated it because writing ‘Night Games’ I was really worried because I didn’t want to trash the game or sport, but you therefore ignore these kinds of stories as a result. Tony was aware of the juxtaposition that existed when looking into these issues and was trying hard not to trash the game in that process.

B: Have you received any feedback from the sporting bodies themselves, or even ex-players that have contacted you or people within the industry?

A: I’ve had no official response, but I have had personal emails from footy coaches and from footballers, and they’ve mostly been really good. They’ve been adamant that things need to change and were quite appreciative of the book, that it wasn’t ideologically driven and only presented black and white views.

They really appreciated that was a ‘shady area’ that was covered, and it wasn’t about pointing the bone at anyone, just exploring the complications.

B: Do you think in the way women’s round and its messages are structured, do they reinforce gender stereotypes? Do you think it is potentially condescending?

A: I think to call it outright condescending isn’t the right approach; I think within the AFL it’s quite a genuine attempt from the top down, to really change some attitudes that have been really entrenched within that world.

With the NRL, there was that advertisement I quoted in the book talking about women and that was condescending. It was talking about women being “the wind beneath men’s wings”; happily opening the canteen roller door, pumping up the footies, and getting the boys to training. I found that pretty sickening and that was definitely a condescending moment, because that really reinforces the idea of women just being service providers and men are heroes, with the woman there to just help prop them up.

I find it really great there’s going to be a female footy match before the [Melbourne vs. Western Bulldogs] game. They’ve got a very difficult job on their hands (the AFL), and that’s something that’s not just footy, it’s bled in from society in general.

B: On that, are the attitudes that are held within football circles just a sample of the views held within society towards women, or something entirely different that is more amplified and aggressive?

A: It is amplified in the world of footy, as it is amplified in the military because these are largely male worlds; and is a world that is dominated by this code of masculinity. This idea of what it means to be a man; and it’s a bit of a loopy idea really, the idea of being a man that is at the exclusion of women really which a damaging set up from the word go.

I guess football is, in a way, is quite special because this is where these attitudes are prevalent and they’re entrenched. But it is special, because this where it is a golden opportunity to change attitudes and to show all of its followers and fans, it doesn’t have to be like this.

Football should be a place where you can expect boys to become decent men, not just become good footballers. And that could be something to really proud of, and I guess there are reflections of society in these worlds and fraternities that are amplified.

But adding to that, there was this really great line from the writer Malcolm Knox [in his review of Night Games], and he wrote this line, “How do you separate the poison from the magic?”

And it’s this big conundrum when it comes to this kind of team sport, where there’s all this adulation towards the magic of a football team, where they’re so intensely bonded and they have a ‘sixth sense’ to where each other and they barely need to look to find each other on the field with a handball.

But that also can create a kind of poison, because they’ve so intensely bonded that there is no room for dissent, individualism or one guy to say ‘Hey, I don’t agree with this, what’s going on’.

When you have this close intimacy and such a typical insider mentality, that means there’s going to be outsiders. Those outsiders in this childish world can find themselves become victims or at the expenses of jokes.

B: With changing the way it is now, is it time? Is it more women in roles of greater influence? How would you change it?

A: I obviously thought a lot about this, how do you change it? And as I mentioned, obviously re-humanising women in this world by getting more women involved, there’s contact and opportunity for friendship which is really important. And especially with these guys who have been syphoned off from society and don’t seem to have that opportunity to have really good friendships with women who can be seen as equals and peers.

It’s also an issue of leaders and in a way the answer is already there, because there are really good men in football. And its matter of seeing have they done this right? How have they managed to have these healthy relationships and have been able to stay so grounded? How do they have such a healthy respect for the opposite sex?

Maybe the answer is under the football world’s nose, how come you have an Adam Goodes and a Chris Judd, and how can we make more leaders like them?

B: What are your thoughts in the way the current developments in the Stephen Milne case have been handled by the league itself, and the press?

A: This is such a difficult situation, and because there are contradictory things in the sense of the line of thought that you are innocent until proven guilty. And to suspend someone or make them step down because of charges that have been laid against them is dangerous because you could be pre-empting this guilt that is not there yet, or not going be ever there.

It’s a very precarious tightrope that the AFL has to walk. They also have a responsibility to the game and their fans, who are largely children and it’s a family game, and what message do they want to send?

I am not really jealous of the position that the AFL are in [right now]. There’s also this cynical outlook as well, St Kilda got rid of [Andrew] Lovett really quickly when those charges were laid. Milne is a different beast altogether really, he’s pertinent to the club, crucial to them winning and he’s closely bonded to the guys.

A: And the right thing might actually be letting him play, but I don’t know. It’s a really tough call.

But I do wonder what effect, and not commenting on the Milne case specifically, but I wonder about the effect that it is has on a woman who has made complaints but have failed to have any traction with the police, courts or clubs themselves.

And I do really wonder about the effect it has on them to open the paper and turn on the telly to see this adulation towards someone who they claim has hurt them very badly. And that makes me really sad, I find that really heartbreaking. You’re really talking about people’s lives when you talk about these issues about playing or not playing.

Byrne to debut for Blues 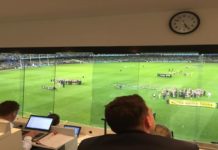 Inside the AFL press box