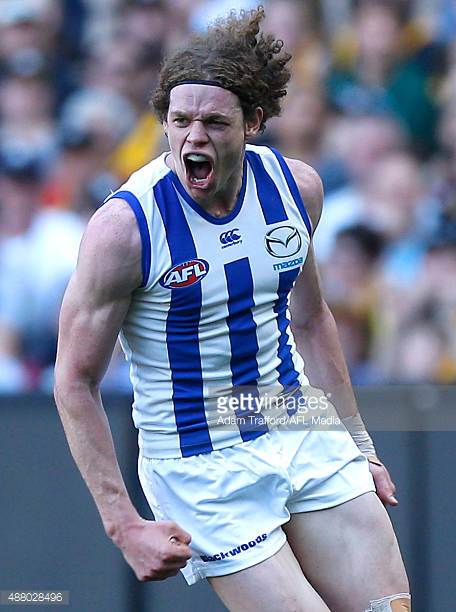 If there is one team in the AFL that is extremely hard to gauge on the extremities of their best and worst form in season 2017, it would be North Melbourne.

It is hard to forget of course that the Kangaroos headed the ladder after nine straight wins to open the 2016 season, only to fall away dramatically in the second half of the year. The Kangaroos tasted success in just three of their last 14 matches, exiting the finals with a 62-point defeat to the Adelaide Crows in an elimination final in Adelaide.

So far at the halfway mark of 2017, North Melbourne has a record of four wins and seven losses, and sits in 13th place on the ladder.

While the Kangaroos’ best form has been very good, often it has been unsustainable over a full four-quarter effort, resulting in a number of substantial leads that have evaporated and games lost from positions which seemingly should never have occurred.

Undoubtedly, the highlight of the season to date for North Melbourne was the Round 7 win over the then undefeated Adelaide Crows in Hobart. This was a match in which North opened the game with a stunning ten-goal opening term, holding the Crows scoreless in taking a 64-point lead in the first break. The Roos went on to win this match by 59 points, kicking a season high score of 22.13 (145) in the process. 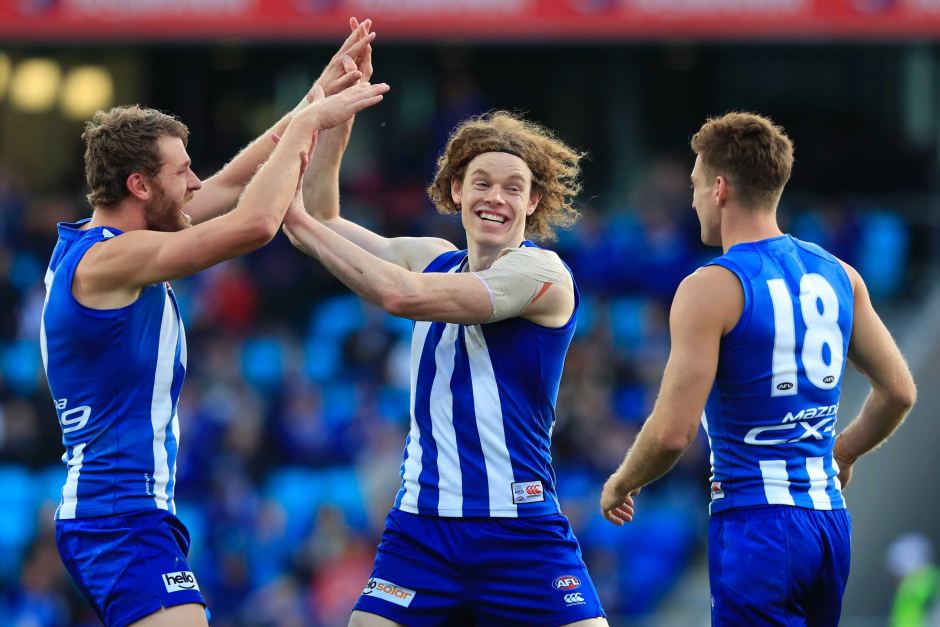 Over the first 11 rounds, North’s forward line has posted at least 100 points on five occasions, with the goal tally led by the talented marking forward in Ben Brown with 28 majors. Meanwhile Kayne Turner, Shaun Higgins, Mason Wood and Jarrad Waite have all averaged more than one goal per game, albeit with Waite and Wood playing just five and seven games respectively mainly through injury.

However, when it goes bad for the North Melbourne forwards, the output really suffers, as three scores of 67 points or less for the season proves. The Kangaroos’ score of 9.8 (62) against Fremantle in Round 5 proving almost enough to get an away win, but for a late Shane Kersten goal.

Of course that narrow loss to the Dockers’ leads us to the other notable theme of the Kangaroos’ season to date, the giving up of substantial leads.

Going back to the Round 2 encounter with Geelong at Etihad Stadium, where North Melbourne burst out of the blocks early with five of the first six goals, before the Cats steadied. However, the Roos again opened up a lead of beyond five goals late in the third term, before faltering badly in the final quarter with Geelong snatching a one-point win.

Two weeks later against the reigning premiers in the Western Bulldogs, North held a 29-point lead just after half time in a low scoring game, only for the Dogs to close the gap by the end of the quarter. While the last term saw the lead change hands a number of times, it was the Bulldogs who claimed the win after a late shot at goal from Lindsay Thomas in his 200th game was wide of the mark.

The very next week in Perth against the Dockers, North Melbourne again held a 29-point lead early in the third quarter in another low-scoring game, but this time they didn’t surrender the lead until the 30 minute mark of the final quarter where a freakish snap by Shane Kersten saw the Dockers take the lead at the right time of the match. 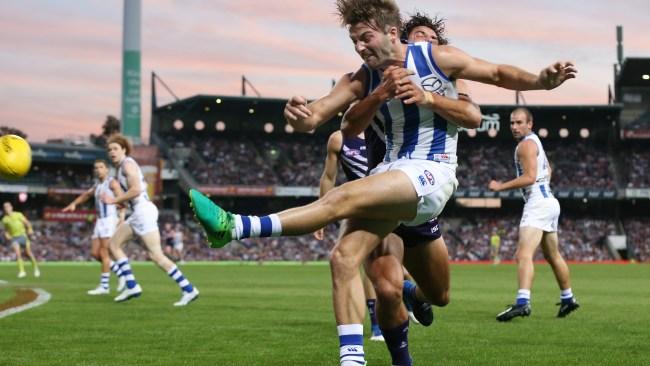 With three heart-breaking defeats amongst the Kangaroos’ five losses in the first five rounds, North’s fortunes turned with wins over the Suns and Crows, but a seven-goal loss to the Sydney Swans at Etihad was unexpected given the Swans poor start to the season.

North of course bounced back with an impressive win over Melbourne at the MCG in Round 9, before a bizarre match against the Blues showcased the best and worst of the Kangaroos enigmatic form.

Opening with a blistering seven goal to two first term, North led Carlton by 32 points at the first change, a lead that was extended to 45 points at the 11 minute mark of the second with the Roos’ tenth goal of the match.

While North conceded the last three goals of the quarter, a 25-point buffer was still a handy result for an 11-goal haul for the Kangaroos in the first half.

Amazingly though, by the three minute mark of the final term, Carlton through Sam Docherty had claimed the lead and had all the momentum. At this crucial stage, however, North Melbourne responded accordingly, reclaiming the advantage and extending it to a 23-point buffer before a late goal to Carlton’s Liam Sumner left the final margin at 17 points.

Meanwhile last week, North held a seven-point lead 22 minutes into the second term over Richmond, but kicked only two more majors for the rest of the game as the Tigers streeted away to a six-goal win. 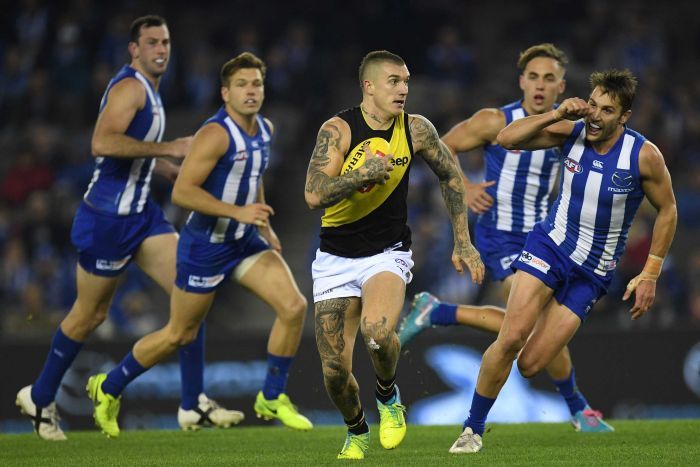 To be fair to the Kangaroos, six of their seven defeats have been to teams currently occupying places inside the top eight, while the other loss was against last years grand finallist in the Swans, highlighting the difficulty of their fixture to date.

With upcoming matches after the bye against St.Kilda, the Bulldogs, Gold Coast and Fremantle, there are definitely winnable opportunities available if the Roos can produce their best form. The only problem is, when and where this occurs is far from predictable or as it seems from previous experience, even sustainable for a whole match.

Season 2017 for North Melbourne will not be one in which the Kangaroos see September action, and while this is a step back for a side that has played finals in each of the last three years, it was to be expected given the loss of experience suffered after the departures of Brent Harvey, Drew Petrie, Daniel Wells, Nick Dal Santo and Michael Firrito at the end of last season.

If the Kangaroos can win another four or so matches in the second half of the season, and remain competitive in others, there should be scope to build upon in 2018 and beyond with a degree of optimism for Roos fans. Whilst a fifth premiership seems a while off, it is unlikely the North Melbourne will drop to the extremely low levels shown by the Brisbane Lions or Carlton at times during their rebuilds, and Kangaroos fans can hope for more success in the short to medium term at Arden Street.