Explosive allegations rocked the NRL world, allowing the topic of drugs in sport to rear its ugly head once again, but the aftermath could have huge ramifications that roll on over to the AFL and the Essendon Football Club.

Whilst the Manly Sea Eagles and North Queensland Cowboys were linked in the Australian Crime Commission report, it is the Cronulla Sharks who are being scrutinises heavily.

The Sharks are heavily rumoured to be in strife with ASADA. It is known that ASADA visited them unannounced, along with other clubs, to conduct tests.

The news broke that as many as 14 players from Cronulla could be suspended for six months and as a result, bookmakers proceeded to suspend betting on all Sharks matches. This news couldn’t come at a worse time for the NRL as the season is just around the corner.

The news has sent shockwaves through NRL circles, much like when Essendon handed itself into the AFL and ASADA officials. Cronulla will become the public media face of this issue that has now spread to Rugby League.

These allegations, if true, would rock not just the NRL but have huge implications for other sports codes being subjected to the same investigation. This is particular concerning for Essendon, a club that has been in the media for weeks as it is also being investigated for illegal substance use.

Whilst this is already bad news for the Bombers, it emerged that Stephen Dank had been working at both the Cronulla Sharks and Essendon. This is the most damning development in this story and shows that where there has been a drug fire, Dank is generally near by with a box of matches.

It has been well-documented for weeks through various forms of media who Dank is. He earlier went on ABC to categorically deny all allegations, although he did admit that some of his practises were on the edge with what was allowed in Australian sport.

The period which is coming under fire from the ACC is the short period in 2011 when Dank was at the Sharks. He later left after a fallout with club medical staff.

This came after it was revealed that all NRL clubs named in the report were found to have some association with Dank.

These circumstances are scarily similar to Dank’s tenure at Essendon. He was employed by the Bombers but left in similar circumstances as club doctor Bruce Reid alerted senior Essendon officials of his controversial actions.

The AFL media’s reaction this news from up north has been muted but these advances from ASADA could potentially have huge ramifications for AFL clubs.

It is widely believed that the Sharks called an emergency board meeting when word spread that they would be facing drug charges. The club reportedly also hired lawyers to negotiate six month bans with the NRL.

If the Sharks are found to have done any wrongdoing, it is likely to affect the whole of the NRL competition. Betting has already been suspended for the first round’s matches but it could serious impact on crowds, membership and the all-important sponsorship revenue.

These finding are a huge development in the seemingly never-ending Australian sports drug scandal. Whilst this may be consigned to just the NRL for now, this could be a precursor to what Essendon may face down the track. Although it may not seem relevant at the moment, these developments should shock all Bombers and footy fans alike.

Ignored rules need to be brought back into vogue

Nic Negrepontis - 4 August, 2015
0
In the current discussions about what rules need to be added to our game, we tend to overlook the pre-existing rules that are not...

Goddard deal a miss for Bombers, blessing for Saints 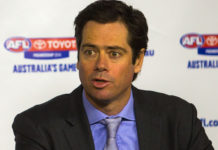