Gary Ablett Junior is a superstar of the AFL and has been for many years, collecting more awards than his teammates have games played. He was a superstar for Geelong, playing in two premierships, winning two Best and Fairest awards and a Brownlow Medal. When you add the fact that he was a four-time All-Australian, three-time Players Association Player of the Year and three-time Coaches Association Player of the Year, Ablett Junior achieved more than any AFL player can dream of at the Geelong Football Club.

Having achieved all of these accolades, Ablett moved north to become captain of the newly formed Gold Coast Suns. Ablett went from a winning culture to a side that won only three matches in their inaugural season and only three more in the following season. Despite the lack of team success, Ablett improved as a player, adding leadership to an already incredible list of attributes. He received another two All-Australian jumpers, including being named as captain in 2011, another Leigh Matthews trophy from the AFLPA and two more Best and Fairest awards.

Gary Ablett has nothing to prove. He has done it all and presumably still has plenty of football left in him, having recently turned 29. However, if anything was ever going to make this great man nervous, Saturday night’s match against his former club may be it. While Ablett has already faced his former side twice since moving to the Gold Coast, he is yet to play them at their home ground of Simonds Stadium.

In the two matches Ablett played Geelong, both were played at Gold Coast’s home ground of Metricon Stadium. Ablett missed the homecoming match in 2011 due to a hamstring injury, and was left to watch on as Geelong destroyed his Suns by 150 points. In the two other matches between the sides, Gold Coast was far more competitive, losing last year by only 14 points.

This year, Gold Coast are a rejuvenated side. They have already won more matches this season than in either of the previous two seasons and are yet to lose a match by over 50 points despite having played against both of last year’s Grand Finalists. For the first time in their history, the Gold Coast Suns are consistently competitive.

With this form in mind, Gary Ablett and his Suns will make the trip down to Geelong to face the Cats at Simonds Stadium. The last time Gary Ablett played at Simonds Stadium, it was in a 44 point victory over the Eagles, Round 22, 2010; and the ground was known as Skilled Stadium. Since then, Simonds Stadium has hosted 14 matches, with Geelong claimed 13 victories. However, no match will mean more to the Geelong faithful than the upcoming match against Ablett’s Suns.

For the first time in his career, Ablett Junior will step out onto Kardinia Park to play against Geelong. The man who has achieved it all in this game will have yet another defining moment in his already illustrious career. The result itself seems a somewhat forgone conclusion, as despite any improvement made by the Suns, Geelong is still the juggernaut it has been for years, especially at home. However, if Ablett and his Suns can show the effort they demonstrated last week against Hawthorn, the Geelong fans who may still take umbrage at Ablett leaving the Cattery may gain even more respect for the man who commands it like no other.

Honesty not always the best policy under contract speculation

Tamara Rocco - 20 August, 2015
0
Speculation is rife each season around superstars of the competition falling out of contract each year. Yet the professionalism, consistency and honesty players handle... 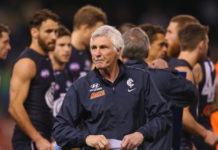