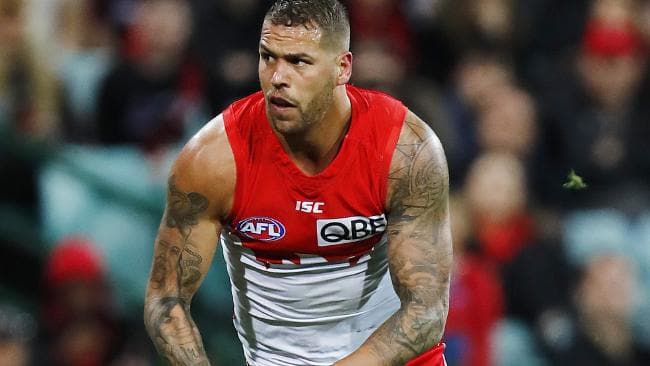 For this 2018 AFL season, The Drop Punt will select the player who has excelled over the round of football, and as such will be named the Player of the Week. At the end of the season, all nominees will be in with a chance to take out the inaugural Bernie Quinlan Medal as The Drop Punt’s Player of the Year.

Up until late on Sunday afternoon, this week’s selection was all but certain to be Hawthorn’s Tom Mitchell, but an eight-goal haul at Perth’s new Optus Stadium has seen Lance Franklin come from the clouds to claim the Round 1 nomination as The Drop Punt Player of the Week.

Sunday evening saw the first ever AFL match for premiership points at the new Optus Stadium in Perth, and it was the Sydney Swans that were triumphant with a 29-point win.
Two things emerged from the match, Luke Parker’s freakish slingshot goal to seal the match late in the final quarter and the heroics of Buddy Franklin up forward as he has done so often over the last decade.
Franklin kicked five goals in the first half, finishing with eight in total, and not only that had 17 kicks, nine marks and five tackles in a brilliant display from the Swans’ spearhead.

It was a career-best haul against the Eagles and also was Franklin’s best ever opening round performance, surpassing his 6.3 to open the 2008 season when he was in Hawthorn colours. Now we’re not suggesting Buddy is going to kick 100 goals this year as he did back in 2008, but Sunday’s display sure proves he’s still got plenty of magic in the tank.

As a consolation, we do have to mention Tom Mitchell and his record-breaking 54 disposal performance in Hawthorn’s win over Collingwood on Saturday night.
Mitchell started in terrific fashion from the get go, and accumulated an incredible 29 disposals in the first half. He went on with the job after half time with a further 25 touches, to break the VFL/AFL disposal record of 53 previously held by Greg Williams and Gary Ablett.
Mitchell clearly loves playing against Collingwood as his previous best disposal tally of 50 came against them in Round 9 last year, albeit in a game the Hawks lost. It also now means that Mitchell is the only player in VFL/AFL history to have twice surpassed 50 disposals in a game. Quite a feat from the 24-year-old.

So to recap, this weeks The Drop Punt Player of the Week is Sydney’s Lance Franklin who is now in the running to win the Bernie Quinlan Medal, with an honourable mention to Hawthorn’s Tom Mitchell who almost had the nomination until the excellence from the Swans’ number 23 over in the West.