Football Federation Tasmania has begun the new campaign of bringing a new state-wide league by enlisting the Melbourne Victory as naming rights sponsor of the new Victory League.

With AFL Tasmania looking to merge off Hobart and North Hobart, and the other turmoil that the Tasmanian State League has faced with the loss of coverage, it might be the best chance for the Kangaroos to gain a foot up on the Hawks, and possibly even the Melbourne Victory.

The Tasmanian State League may lose its biggest sponsor, the Wrest Point Casino, which will surely make the league’s battle for survival that much harder. It’s a chance for the Roos to not only give back to the Tasmanian community, but also make sure that the future is Aussie Rules and not the round ball game.

Since the Hawks have been in the state, they have travelled to each part of the state, including the west coast of Tasmania and hold clinics, as well as having donated items to help rebuild a grandstand at KGV Oval.

It might sound like a bizarre idea for the Kangaroos, who are looking to play more games in Tasmania, to take a chance and put their name to a local football league. However, Tasmanian football has been on the decline since the early 1990s, and has hit critical levels lows. Clubs have enlisted the help from names such as Brendan Fevola, Jason Akermanis, Cameron Mooney, Russell Robertson, Jason Laycock, Luke Shackleton, and Andrew Lee in recent years to bring a bit of ex-AFL star power, each with only moderate success.

For the Tasmania State League to have a chance of survival if the Wrest Point Casino does in fact pull the pin, it is going to need someone to come into bat, and with North Melbourne looking to battle both the Hawks and another code, the idea needs to be put on the table.

The Hawks have given their name to the state high schools competition, the Tassie Hawks Cup was this season won by Kings Meadows from the North.

After a disappointing end to their season, the Roos will need to do something to win over some of the Tasmanians who aren’t yet convinced.

St. Kilda struggled to gain memberships in the state, despite setting up stalls at the Royal Hobart Show, and other events around the state.

Unlike the Hawks the Saints never really got into the community and weren’t there to win over fans, they held some clinics, but the Hawks did a lot of leg work that the Saints failed to.

The Roos will have to learn from the mistakes that the Saints did, and do more than the Hawks are doing in the state.

Alex Darling - 1 November, 2014
0
In May, when it was announced as expected that Gillon McLachlan would take over from Andrew Demetriou as AFL CEO, we examined what he... 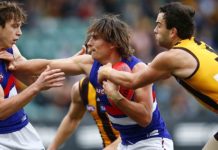