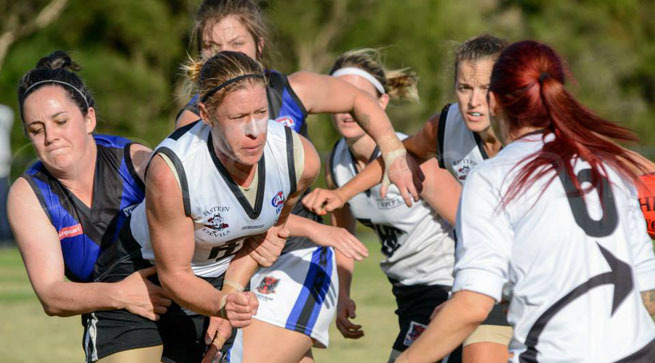 The AFL has a section on its community site dedicated to ‘understanding female footballers’. While it makes some valid points and may act as a useful reference for coaches, it does little to quell the gender divide and stereotypes prevalent in footy. In fact, albeit unknowingly, it may even perpetuate them.

The generalisations begin in the introduction, when it is pointed out female footballers are “generally tough, strong willed, determined, train hard, ferocious competitors… and talk a lot”. The jest undermines the list of attributes that come beforehand, which put female footballers on an equal footing with men.

Such remarks don’t help women’s cause to be taken seriously. Neither are they necessary in what is essentially a how-to guide for coaches.

Among some sound advice, here are some other questionable statements:

– “Girls can find it ‘uncool’ to sweat or work hard”

None of the females I know would agree with this statement. Girls sweat and work hard playing a variety of sports – why would footy be any different?

Social media would seem to agree, with ‘#fitspo’ a common hashtag among females on instagram. The statement appears in a paragraph about body image and cultural issues, which are no doubt important issues for coaches to consider. But these issues are not gender-specific and should not be stereotyped: they are relevant to everyone who plays footy.

– “Include time for chats during training”

I’m guessing this point relates to the jest at the start of the post about women liking to talk, a lot. But women can chat before and after training, they can chat while running laps, doing stretches and lining up for drills – why do they need a specified time to chat? Of course there should be an emphasis on fun and enjoyment, but this can be achieved while training and playing footy.

And don’t assume the players don’t either. Yes they may be female, but that doesn’t mean they haven’t lived and breathed footy their whole lives.

Many female footballers have played at junior levels, follow local or professional leagues and partake in footy discussions with family and friends. Gender shouldn’t be a factor in football knowledge. Yes there will be new faces to the game and they will require terms to be explained, but this can be said for both males and females.

– “Socialise and have fun. Coaches should not underestimate this wish of female footballers!”

This may be the case, but also don’t underestimate female footballers’ wishes to be taken seriously. Females want pathways to improve and expand their game, they want opportunities to play at various levels including elite, and mostly, just like men, they want to be seen as competitors. Socialising and having fun is a great and important aspect to the game, but if this is the way female footy is viewed, how will it ever get beyond grass roots footy and curtain raisers?

The AFL is no enemy to female footy – in fact, it’s one of its biggest supporters.

But we need to start thinking about how we describe and view the women’s game, and avoid the tendency to generalise and stereotype. Let’s not create any more division than there needs to be. Instead, we should be concentrating on equality by creating a game that allows women to have the same opportunities as men – including the opportunity to be taken as seriously.

Ethan Meldrum - 26 March, 2015 0
Story of the Summer Essendon's off-season was pretty tame. Right? The Dons have owned newspaper front pages for two years now, but the most significant recent...

The greatest team of all?