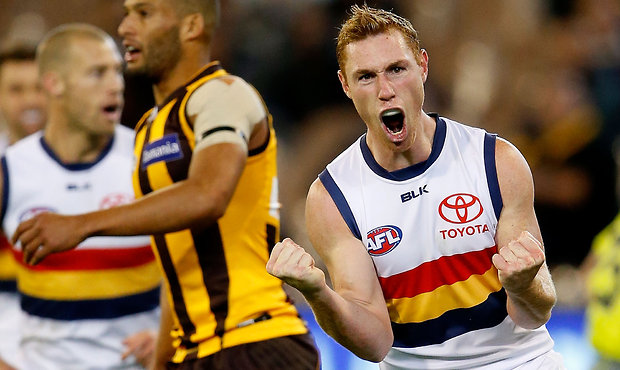 Saturday afternoon’s Round 2 match of the day sees Hawthorn hosting the Adelaide Crows in what should be a terrific clash at the MCG.

Last week, the Hawks were swamped in the last 45 minutes by a rampaging Essendon outfit, while the Crows overcame a sluggish start to completely overpower Greater Western Sydney at home.

In recent times, Hawthorn have had the best of the head to head contests between the two sides, winning their last seven encounters stretching back to 2012. However, the Crows have been more than competitive with four of these matches decided by less than two goals.

The Crows last win over the Hawks at the MCG came back in 2009, while the Hawks have won the last four, including two finals wins in the 2012 preliminary final and 2015 semi final respectively.

While Hawthorn has now lost its last three games at the home of football, they still have an recent positive ledger at the G, with a 7-6 win-loss record since the start of 2016.

On the other side of the coin, Adelaide has in fact won five of its last seven games at the MCG, however, the two defeats were at the hands of Hawthorn.

Both the Hawks and Crows are quality outfits that score more often than most sides, with Adelaide averaging 114 points and Hawthorn 95 since the beginning of 2016. This should ensure an entertaining contest, and either side winning would not surprise.

However, the Crows are overdue an MCG win over Hawthorn, and their impressive win over the Giants last week suggests that today could be the day it happens.

The Hawks killed my father

Jourdan Canil - 3 June, 2014 1
Please excuse the tabloid headline. It’s beyond cliché and I ummed and erred over it for quite some time. But for a while there,...