If many Essendon fans weren’t already frustrated with the team’s lack of action in trade week, Liam Pickering’s comments on radio would have tipped some of them over the edge.

Pickering, the manager of West Coast defender Mitch Brown, told listeners on SEN that Essendon had been offered picks 25 and 26 for the contracted Cale Hooker to be traded at West Coast as part of a three-way deal with St Kilda.

It would have seen Brown go to St Kilda, Hooker and Jamie Cripps go to the Eagles and the Bombers receive picks 25 and 26. In the end the deal didn’t go through as Hooker, who is originally from Western Australia, wanted to stay at the Bombers and honour his contract.

There are two ways of thinking about this situation for Bomber fans – Hooker’s loyalty is something worth rewarding and indicates the club culture, or the Bombers should have done what was possible to make it happen. The club’s new motto is ‘whatever it takes’, so they are asking why it wasn’t done. Club loyally is great but it doesn’t always win you premierships.

Hooker struggled in 2012 and was dropped late in the season. His form hasn’t been the same since he did his hamstring chasing Lance Franklin a couple of years ago.

In a side which has plenty of tall timber, losing one player who is on the fringe of things, doesn’t seem a big loss in the big picture. For Bomber fans, it was the end of a disappointing trade period which again failed to see them have great success on the trade table.

From the outside looking in, many people would say Essendon had a successful month. The club landed the biggest fish in free agency in the form of Brendon Goddard and got pick 52 for Angus Monfries when it could have lost him for nothing. The Bombers also secured father-son pick Joe Daniher with their first-round pick at number 10, which is a steal no matter how you look at it considering Daniher’s attributes.

While this has added to the Bombers’ list, only pick 52 was achieved through trades. They were unable to get any other deals done. This either means one of two things – the Bombers think they have a list which will take them to finals and possibly top four, or once again they failed at trade week.

It’s well known that the Bombers have been difficult to deal with at trade periods and one could think this was again another occasion of Bomber officials asking for too much.

Bomber fans wanted another midfielder added to the list, to take pressure off Jobe Watson. While they got Goddard who can play in the midfield, they didn’t get a genuine midfielder. Instead, all they got was a false hope and no result.

The Bombers were linked with Josh Caddy, Josh Toy, Greg Broughton, Jordan Gysberts, Brent Moloney, Koby Stevens and Ben Jacobs to name a few. Not one of them ended up with the club for various reasons, which has left fans again questioning why this continues to happen. Two of those look set for the Pre-season Draft, which adds to the frustration.

Fans don’t want the club to sit on their hands and have the same players on the list who haven’t done anything; they want fresh faces that can play certain roles. They want the club to follow the lead of Sydney and fill the needs of the club. Hawthorn, Geelong and Collingwood, all finals contenders, were able do it, so why can’t Essendon do the same?

For the Bombers, trade periods in recent years are full of who they didn’t get and nightmares of those who they did get. Big fish Chris Judd, Wayne Carey and Shaun Burgoyne all spoke with the club before moving homes, but the Bombers were unable to land any of them. Instead, the names of Mark Williams, Richard Cole, Justin Murphy, Mark Alvey, Matthew Allan and Damian Cupido haunt fans as what not to do in trade week.

While the club was happy to land Goddard through free agency, supporters are sick of the club struggling come trade time. Surely there will be a time when the Bombers and successful trades are mentioned together, and for the sanity of Essendon supporters, the sooner the better.

Ashleigh Craven - 14 May, 2014
0
After five years of trialling Monday night football, the AFL has shot themselves in the foot by showing the round eight clash between St...

We forgot about the footy 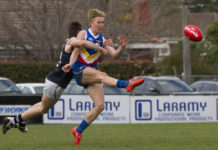 Why trading future picks is a great move