“Let me tell you something my friend. Hope is a dangerous thing. Hope can drive a man insane.”  This quote, from the movie Shawshank Redemption, is as relevant as ever for the AFL supporter in March.
These fans have had the opportunity through the JLT Community Series, to see their hot prospects match it against the best players in the country, and liked what they have seen.
They’ve seen their newly acquired 100 gamer in trade week collect 20 possessions and a goal, immediately stating to their mates that “the change of culture” is what has assisted them in their development overnight.
They’ve already pinned their hopes on these kids and new players filling those ever present holes from the season before, and being that missing piece to their “premiership puzzle”. After all, only six months beyond the Western Bulldogs’ premiership win from seventh place, who could blame them?

Yet as many people are aware, the pre-season is not always an accurate depiction of the regular season. Therefore, I have attempted to analyse each team’s prospects for the upcoming season in an attempt to ease the minds of those with hopes that could send them insane. I have also managed to make some bold predictions myself from the analysis that I hope I won’t regret!

1. Adelaide will be the minor premier

At the risk of going against popular opinion, I do not think Greater Western Sydney will finish on top of the ladder this season (tough draw and young sides can be inconsistent), yet I’d have to agree they will be very strong and are still my tip to win the premiership. Yet one team that is sneaking under everyone’s radar are the Adelaide Crows. They are the real deal and will be hard to beat in 2017.

The Don Pyke coached Crows outfit play an attractive brand of football that is quick, efficient and high-scoring. The 2016 Adelaide Crows led the AFL with 2483 total points scored over the home and away season, averaging almost 108 points per game. To put this into perspective, the closest rivals to this were the GWS Giants who scored more than 100 points less than the Crows.

The combination of Eddie Betts-Taylor Walker-Josh Jenkins as a trio provided an extremely difficult task for opposition defences alone, yet include the electric small forward Charlie Cameron and the talented marking prospect Mitch McGovern in the forward line, and you have one that will be near impossible to counter.

Adelaide’s midfield also shows signs of promise. The Ballarat-born Crouch brothers will play a crucial role in the side’s finals push this season if they can avoid injury, and Daniel Talia has hinted in press conferences that we will see the lethal right foot of Rory Laird in the midfield more often as the season progresses.

Adelaide also has an incredibly “soft” draw. The Crows play at Adelaide Oval 12 times this season, and in the first 10 rounds, only play three of last year’s finals contenders. I would not be surprised if we see Adelaide win eight or nine of their first ten games this year.

To all Adelaide supporters, I encourage you to hope. 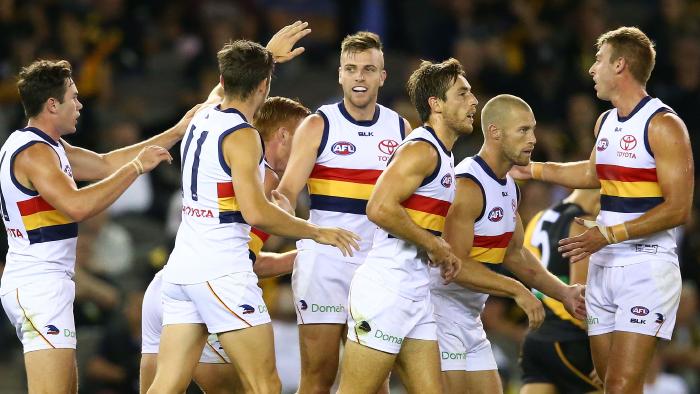 2. The Cats could miss the eight

The buzz around Geelong is that they are priming themselves nicely for another shot at the top four and tilt at the premiership in 2017. Patrick Dangerfield was extremely impressive in the JLT series, showing why he is the incumbent Brownlow Medallist and arguably the best player in the competition.

Yet, I have serious concerns with the Cats.

My numbers have them finishing in eighth position, but this is centred on Dangerfield continuing his 2016 form. This team has done remarkably well at refreshing their list after the departures of several future Hall-of-famers, remaining continually competitive. Their depth however, is a massive cause for concern.

From last year’s line-up that finished in second position, Geelong has lost Jimmy Bartel, Corey Enright and Josh Caddy. They have pinned their hopes on the wildly inconsistent Mitch Duncan to carry a larger load, and 2016 mature age recruit Sam Menegola to take another step.

If Patrick Dangerfield goes down with a serious injury (touch-wood), I cannot see Geelong being able to win enough of the football to be competitive against top sides.

As I alluded to in the introduction of this article, the pre-season competition can set unreasonable expectations on a teams or players future performance. However, what I saw in Port Adelaide’s Sam Powell-Pepper, was a young player who does have star potential. The 19-year-old recruited from East Perth is a strong, big-bodied, goal kicking midfielder, who can intimidate opposition players through sheer physicality. You know who he reminds me of? An certain out of contract Richmond player….. 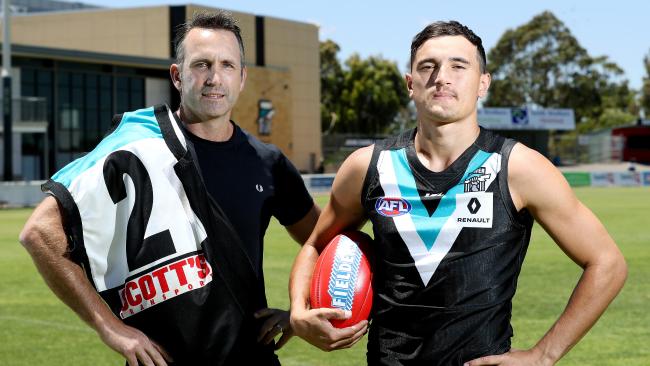 Of course, the out of contract Richmond player is Dustin Martin.

The game changing forward/midfielder was a standout in Richmond’s horrific 2016 campaign, where he finished third in the Brownlow Medal and won the Tigers best and fairest in front of star defender, Alex Rance.

Unless Martin’s contract becomes a distraction, he is sure to be prominent on Brownlow night. Richmond’s added midfield depth will be important to players like Martin, who will be able to spend more time up forward where he is a dangerous prospect one-on-one. A proven vote-getter, Martin’s freedom to play forward and kick goals could only work in his favour, and we could see another Richmond player awarded a Brownlow Medal in 2017, sorry Bombers fans. 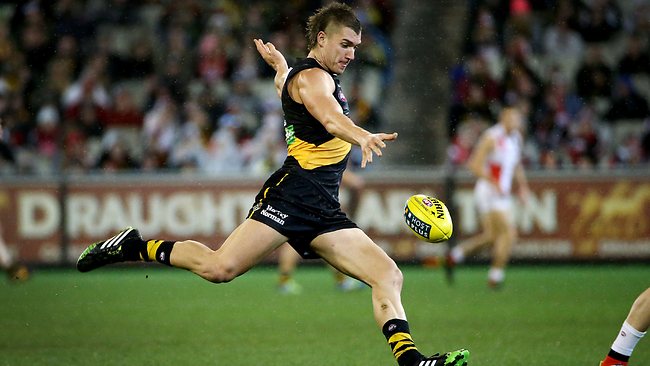 Somewhat surprisingly, David Koch came out before Port Adelaide’s first JLT Community Challenge game and stated in an interview with FIVEaa (2), that their expectations are “at least finals” and that after “two years of failure in a row – there can’t be a third”. Koch’s statement is a strong one, and proves that Ken Hinkley’s position may not be secure heading into the 2017 season.

Port Adelaide has a challenging start to 2017, playing GWS, Adelaide and Sydney, all of which are expected to finish in and around the top four. Like the Crows, the Power also play 12 games at Adelaide Oval this season.

Usually an advantage to play at home, Port Adelaide bucked this trend in 2016 and finished the season with only four wins out of 12 games at the ground. If Hinkley has any hope of remaining in his post at Alberton, the Power MUST reverse this trend. 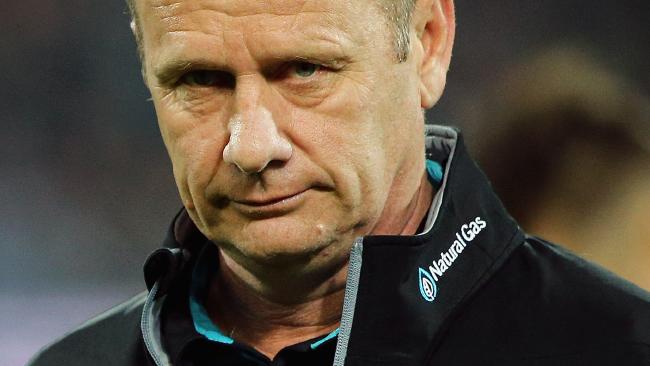 The “finals or bust” mentality is not exclusive to Port Adelaide this season, with Nathan Buckley at Collingwood and Damien Hardwick at Richmond facing similar expectations.

Although Gary Pert has publically stated on SEN radio that this is not the case (3), the out of contract Buckley will face serious pressure if Collingwood fails to perform this season. Buckley in an interview with SEN in August last year stated “there’s no way” he would be re-signed if they missed the finals in 2017. (4)

Collingwood also has a challenging start to 2017, playing five of 2016’s finalists in the opening nine rounds. If Buckley’s men fail to perform in these games, their finals hopes maybe all but over.

If you listen to the players at Richmond, Damien Hardwick will remain in the job for the next ten years. They love him and up until last season, most supporters at Richmond loved him also. After being re-signed with a year to go on his contract at the start of 2016, all was well at Tigerland. The faithful who had been starved of success for so long, finally had cause for positivity and hope.

Then came Richmond’s horror 2016 campaign. After three consecutive finals losses in 2013, 2014 and 2015, Damien Hardwick’s game-plan and player development was all of a sudden coming under scrutiny. The 2017 season shapes to be an important year for Hardwick and the Richmond Football Club. The Richmond hierarchy obviously believe they are still in contention for a spot in the finals this season, and were arguably the winners of trade week and free agency, picking up potential stars in Josh Caddy from Geelong and Dion Prestia from the Gold Coast Suns.

Hardwick and the Tigers will also be optimistic when they look at the draw for this season. With only one return game against last year’s top four in the GWS Giants, the Tigers have every opportunity to prove that 2016 was just an anomaly. A poor 2017 campaign however, will see the ever-passionate Richmond faithful voicing their opinions even louder.

The Tigers have a massive supporter base, and if a “rebuild” is required at the end of 2017 for the Richmond Football Club, it is very hard to see Hardwick being entrusted with the job. 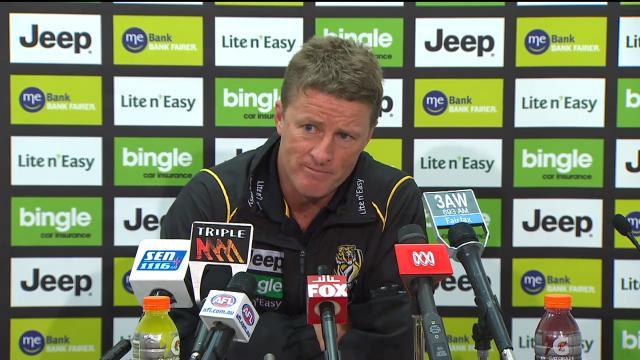 So there it is, my bold predictions for the 2017 season. For those wondering if you can relieve yourself from the prospect of insanity already, here are my ladder predictions for 2017. I have based these predictions on a team’s draw, AFL player ratings, squad depth, and my personal opinion (necessary due to the difficulty in analysing some teams, such as the Bombers). I wish all you fans with hearts filled with hope all the best, and to take a few deep breaths if it all goes awry!

Damien Berry - 25 February, 2013 0
In the history of Australian Rules football, there has one overwhelming constant; each premiership team as a rule has had an experienced captain with...

Sliding Doors: What if Nick Davis didn’t sink the Cats in...