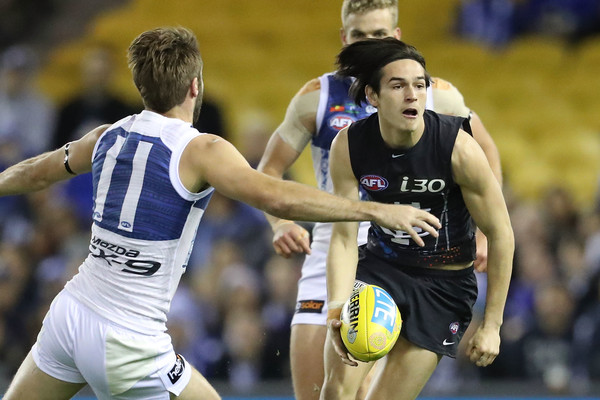 Travelling from one side of the country to the other as a teenage draftee is always a major challenge for any budding AFL footballer, and indeed it was a year to remember for young West Australian draftee Zac Fisher.
Donning the number 25 guernsey made famous at Carlton by Alex Jesaulenko and more recently Brendan Fevola, the 19-year-old played an impressive 17 senior games in his debut season with the Blues.
Standing just 175cm, Fisher was selected with pick 27 in the 2016 National Draft from the Perth Demons in the WAFL, and already had a reputation for clean hands and quick thinking around the contested ball. This is highlighted by his ranking of seventh overall for clearances in the 2016 Under 18 National Championships.
Attending the game against the Hawks at Etihad Stadium in Round 22, I was able to witness first-hand Fisher’s willingness to run and his enthusiasm for the contest, which was outstanding. He certainly fulfilled his role that night in the Blues’ drought breaking seven-point win over long-time nemesis Hawthorn.
Over the course of the 2017 season, Fisher made 17 senior appearances, kicking a total of four goals and averaging 11.6 disposals per game.
However, over the last three weeks of the season in particular, Fisher’s numbers improved and became quite promising for a first year player.
In the Blues competitive 17-point loss in Perth against the West Coast Eagles, Fisher had 13 effective disposals, 12 of them handballs and he booted a goal in his 69% of game time.
Impressively in Carlton’s win over the Hawks, Fisher’s numbers improved again, collecting 16 touches, mostly on the wing, with 12 of these being effective. Additionally he added a vital goal to quell the Hawks’ momentum midway through the second quarter.
Finally, despite Carlton’s 81-point loss at the hands of the Swans in Sydney in the final home and away round of the season, Fisher had 11 effective disposals to be far from the Blues’ worst player.
If the development shown in Zac Fisher’s debut season in navy blue is anything to go by, much like Carlton’s previous West Australian recruits before him, Fisher will be a proud servant of the Carlton Football Club for many more years to come.

Rhys Woosnam - 20 June, 2013 0
He's been called a traitor, a turncoat and even a money-hungry mercenary. When the siren sounds on Saturday afternoon, none of that will matter...

How about that Apple Isle?