The biggest concern over Essendon’s current position should not be what it’s intentions were, but what risks arose over its controversial fitness program. Essendon did what every other club does and sought a competitive advantage. That’s the nature of sport and lucrative business. However in this pursuit, the Bombers have compromised the safety of their own players and if not punished adequately, will set a dangerous precedent.

There are two key pillars to the existence of anti-doping conventions. Firstly, the main obligation is to maintain a level playing field so some cannot receive an unfair pharmacological advantage over others. Secondly, they are upheld to protect and maintain the safety of the athletes in their work environment.

Essendon did not take performance enhancing drugs. AOD-9604 has varying degrees of expert opinion on whether it promotes growth hormone in the human body, but none that would yield any sort of conclusive evidence. However, AOD-9604 is banned under Section 0 of the WADA code, as it is not approved for therapeutic use in this jurisdiction. While it can be recommended by a medical professional to the public, the public are not bound by the same anti-doping laws as professional athletes.

Whilst there are two other alleged substances which are PEDs, Thymosin Beta 4 (one form of Thymosin is banned under Section 2 of the WADA code) and Hexarelin (banned under Section 2), it is unclear at this stage if they were in any way utilised in the Essendon training program. That being said, the fact remains Stephen Dank was in possession of such substances. Considering his alleged duping of Essendon officials and refusal to co-operate in this investigation, the fact that such a man was able to wield power over such a program in a professional environment is enough for Essendon to be punished harshly by the AFL.

In Fairfax’s article from Sunday, it indicates the complete disregard and negligence that Essendon officials were complicit in. Players were “receiving injections or infusions of banned drug AOD-9604 at a volume and frequency far exceeding that of its clinical trials”. This is a drug in which the full extent of its short and long term effects is still unknown, and also has no recommended safe dosage.

Even if proven to be harmless, we cannot allow a precedent for non-regulated and potentially life-threatening substances to be injected into players, in which the results are unknown.  It would see the sport and league reduced to a laughing stock on the world stage. It would rob athletes the basic right of every citizen, which is to participate in a safe workplace.

Whilst James Hird is allowed to comment on the investigation, contrary to what he might tell you, he may not be even able to give the full story. The press release out of Essendon on Sunday reads as an admission that they had relinquished all control of the situation during Dank’s time at the club. “The Club has no knowledge of any ‘clinical trial’ and if this is found to be true, it is deeply distressing and disturbing, and goes to the heart of what may have been perpetrated at our Club.”

The realistic and twisted reality may even be they don’t know the full extent of what happened either, and are waiting on ASADA to tell them. This is no defense for Hird, Mark Thompson, Danny Corcoran or David Evans. Their absence of leadership and sheer disregard for player safety sees them right in the firing line.

As reconstructions of the consent forms from sources had first indicated, which was then followed by confirmation from Jobe Watson, is that players were told AOD-9604 was named as a substance that was WADA compliant. As numerous statements from WADA prove, it wasn’t.

Naturally the question becomes, who faces the bans and the wrath of the AFL and WADA?

In the same article on Monday, Fairfax revealed that “hopes of avoiding suspensions for players found to have taken banned substances rest on convincing the World Anti-Doping Agency that the club deliberately misled, and ultimately betrayed, its players.” In order for Essendon players to not receive sanctions, they must put the club and club officials in the firing line.

This has been an unsavoury time for Essendon supporters, with this hellish experience dragging out for as long as it has.

The idea of having players and club officials pit against each other in order to save themselves is the ultimate nightmare coming to fruition.

James Hird or Jobe Watson? It may just come down to that.

Jourdan Canil - 9 November, 2014
0
Carlton is heading down an intriguing path. To say they are rebuilding is an obvious statement, but it’s the way that they are doing... 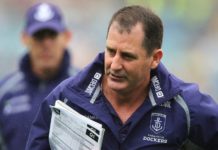 The Lodgebook: We love September