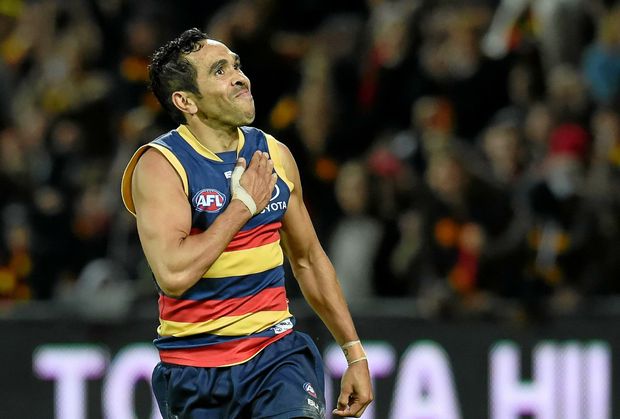 Eddie Betts is two months shy of his 31st birthday, in his 13th league season and has now plied his trade in 276 AFL games with more than 500 goals under his belt.

Yet next week, Betts in his fourth season as an Adelaide Crow, along with his Crows teammates, will play in his first AFL Grand Final.

It is worth remembering, that in nine seasons at the Carlton Football Club, Betts played 184 games and only played in two finals wins in 2011 and 2013.

Betts may not have kicked a swag of goals in the Crows’ 61-point Preliminary Final win over Geelong, being overshadowed by fellow goalkickers in Charlie Cameron (five goals) and Josh Jenkins (four goals).

However, his two first quarter goals and a hand in a couple of other majors set the Crows well on their way to their big win over the Cats.

Betts has kicked 54 goals this season, his fourth consecutive haul of fifty or more since joining the Crows, and next Saturday at the MCG shapes at the biggest game in his career.

While he hasn’t played in a premiership decider, Betts by lieu of his experience with the Blues, is no stranger to big MCG finals in September in front of packed houses, and has played in more than a few decent ones in the past.

The 2011 Elimination Final against Essendon was Eddie’s first MCG final and in front of a massive crowd of more than 90,000, Betts delivered with four goals in the Blues’ big win over the Bombers.

Two years later the Blues and Betts by way of Essendon’s disqualification from the 2013 finals series earned the right to play fifth-placed Richmond at the MCG, and in Eddie’s second MCG final, he kicked 3.2 in Carlton’s come from behind win over the Tigers in front of almost 95,000 fans.

Since joining the Crows for the 2014 season, Betts has played in two more MCG finals, contributing a bag of five goals against the Western Bulldogs in the 2015 Elimination Final, but was held goalless by eventual premiers Hawthorn the next week in the Crows’ disappointing 74-point exit to their 2015 finals campaign.

No matter what the result next Saturday at the MCG, Eddie Betts will be one Adelaide player who with his form and experience in big game finals in front of 90,000 plus fans at the MCG, who surely won’t be overawed by the Crows’ biggest game in almost two decades.

Ashleigh Craven - 31 January, 2013 1
Every AFL season, there are games that football fans define as must-watch games for the season. There are the traditional rivalries such as Essendon...

One Night on the Gold Coast