While it has been a common feature in recent times to see many 100-point plus results with the introduction of the Gold Coast Suns and GWS Giants into the AFL, there have always been occasions where certain teams just dominate another on the right day. Looking at round three in history, this week we examine some of the blow-outs in VFL/AFL history.

Round three 1983 saw two 100+ point blow-out results, of which the first saw Hawthorn travel down to Moorabbin to take on St Kilda and deliver a 129-point thrashing in front of 19,227 mostly disappointed Saints fans.

Meanwhile three of the Saints’ six goals for the afternoon were kicked by Mark ‘Jacko’ Jackson, later famous for his bleached peroxide hair and the Energizer ‘Oi’ ads.

The next afternoon, up in the VFL’s new heartland of Sydney, North Melbourne absolutely demolished the Sydney Swans to the tune of 140 points in front of just under 12,000 fans at the SCG.

For the Kangaroos, Phil Kelly absolutely dominated accumulating 44 disposals, by far the best effort of his 61-game VFL career, of which his next best game was 29 disposals. Bruce Abernethy, later a foundation member of the Adelaide Crows, also had a truck load of the ball with 43 disposals, also a career high in his 112 VFL/AFL games, and current AFL CEO Andrew Demetriou also got amongst it for the Roos and was another player on this day that achieved a career high with 36 disposals. 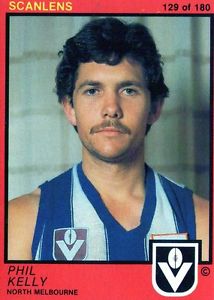 On the goal front for North Melbourne, Kerry Good bagged seven, Peter Jonas kicked five and the Krakouer brothers booted seven goals between them, with Phil kicking four in a 32 disposal game, and Jim contributing three.

The Swans only had one multiple goal kicker, with Craig Braddy proving wasteful in front of goal with 2.4 for the afternoon. 1983 was Braddy’s best season in the VFL with a handy 48.38 coming in 21 matches for the Swans.

Fast forward 11 years to 1994, and round three saw North Melbourne feature again with a huge win, this time at the expense of Hawthorn on a Friday night at the MCG.

For the Kangaroos, Wayne Schwass gathered 28 touches, but he was outshone by his skipper Wayne Carey. Carey compiled 26 disposals, took 17 marks and kicked 7.3 in a best on ground display from the champion centre half forward. Current Swans coach John Longmire also kicked five goals for the Roos along with Adrian McAdam, who burst on the AFL scene the previous year with 23 goals in his first three games, on his way to 68 for the season. Sadly, McAdam disappeared as fast as he flashed on the scene, playing his last game for the Kangaroos in 1995, in an all too brief career that yielded 36 games and 92 goals.

Hawthorn on this day certainly missed champion spearhead Jason Dunstall and failed to have a multiple goal kicker, but would bounce back in later weeks, qualifying for its 13th finals series in a row. However, ironically they would exit the premiership race at the hands of North Melbourne after the first ever final that was forced into extra time.