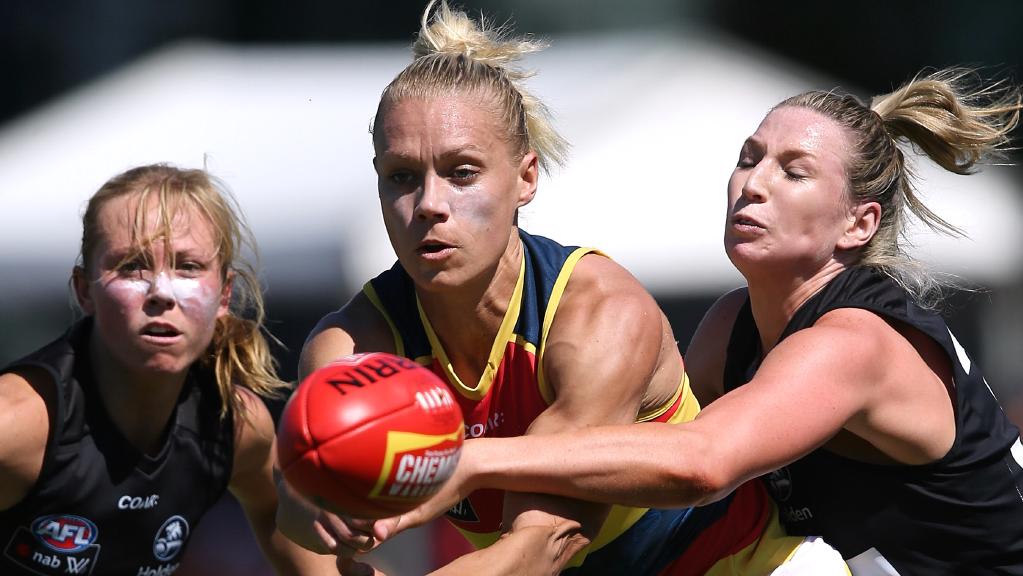 After seven weeks of AFL women’s action, the final round of the regular season has come and gone, with two clubs now left standing to fight it out for the premiership.
By finishing top of the ladder the Brisbane Lions have earned the right to host a home Grand Final ahead of second placed Adelaide, but this match will now be played on the Gold Coast at Metricon Stadium due to concerns over the surface at the ‘Gabba, the Lions’ preferred home Grand Final venue.

Anyway, the final round kicked off with the Demons keeping their flickering hopes alive for a top two finish, at least until the Pies/Crows encounter on Sunday, with a destructive 54-point win over Fremantle. Melbourne’s score of 11.4 (70) was the also highest score of the AFLW season until it was equalled the next day by the Adelaide Crows.
Canberra’s Manuka Oval hosted the Giants/Bulldogs clash and it was the Doggies that finished off their season on a great note, running away from the Giants in the second half for a 32-point win. Ellie Blackburn having a huge impact on the result for the Dogs with 27 disposals and 1.3 for the afternoon.
In the match that would decide who would be playing the Lions in the Grand Final, Collingwood hosted the Crows at Olympic Park, with Melbourne desperately hoping for a Magpie win.
In a contest where the lead see-sawed all afternoon, it was Adelaide that finished the stronger, eventually equalling the Demons’ highest score of the competition with 10.10 (70) after a five goal final term.
Sarah Perkins and Erin Phillips combined for seven goals and 37 disposals between them in an outstanding two-pronged performance.
The final home and away match for season 2017 saw Carlton’s Ikon Park play host to the minor premiers in Brisbane. After a tight first half, the Lions seemingly had the match parcelled up as they held a 24 point lead with nine minutes to go. However, the Blues had other ideas, storming back into the contest with Darcy Vescio setting up Bianca Jakobsson to boot the tying goal with less than a minute remaining. Ultimately, the match finished in the second draw for the season, leaving the Lions undefeated in their seven games at the head of the ladder.

As a result of her brilliantly consistent season, polling votes in every game, combined with her performance on Sunday against the Magpies as icing on the cake, Adelaide’s Erin Phillips has become the first player to claim the inaugural The Drop Punt AFLW Player of the Year. Phillips held out Melbourne’s Daisy Pearce to win by three votes, with the Bulldogs’ Ellie Blackburn and Melbourne’s Karen Paxman tying for third place a further three votes further back.

Akash Fotedar - 18 January, 2013 2
Luke Shuey is undoubtedly a rising star of the AFL and Eagles supporters will be over the moon after he signed a two-year contract...

Real drug issues being swept under the rug