Two major figures in the fight against the Western Bulldogs controversial Edgewater Complex have accused AFL clubs of targeting lower socio-economic areas in Melbourne’s west for revenue via gaming machines.

Carlton, Hawthorn, Collingwood and Geelong were named as the four clubs who were buying into the area at an increasing rate.

“The evidence [of clubs targeting the west] appears irrefutable. Collingwood, Hawthorn and Geelong all have new venues in outer suburbs and clearly see poker machines as the key to their financial viability,” Dr. Livingstone told Bound For Glory News.

“This is short-sighted and detrimental to the AFL’s vowed intention of presenting AFL as a family oriented, community building social institution.”

Hartland went on record accusing Carlton and Hawthorn of targeting the western suburbs, due to “being able to make more money from the area, than their own backyards”.

Hawthorn and Collingwood in the last few years have established two new pokies facilities in Caroline Springs. The West Waters Hotel, owned by Hawthorn is home to 80 poker machines and cost approximately $27 million dollars to construct.

Carlton purchased 30 machines off a local North Melbourne basketball club in early 2012 and also own electronic gaming machines in Williamstown and Laverton, whilst Geelong gain a ‘fair amount of their gaming revenue’ according to a source from EGMs in Hoppers Crossing.

A News Limited report earlier in the year named Carlton as owning the most gaming machines with a figure of 290, Collingwood and Geelong owning 180, and Hawthorn with 155.

Carlton make the most revenue at $16.8 million per year from its gaming assets, with Hawthorn ($13.3 million), Collingwood ($5.6 million) and Geelong ($5.2 million) bringing up the rear.

Both Hartland and Dr. Livingstone have been dissenting parties in the continued fight against the construction of the Western Bulldogs’ new Edgewater Complex, which will overlook the Maribyrnong River. As of 2008, the municipality has the highest average annual pokies losses in the state, at $1148 per adult.

The $25 million dollar project has had numerous setbacks since its 2007 announcement.

The original proposal included 65 poker machines, a function room and four-star hotel and was unanimously rejected by the council in May 2008, after more than 300 objections from local residents and relevant parties.

In the same time frame, the Victorian Commission for Gambling Regulation granted a gaming license for 70 machines in December of 2008, on the condition that 48 of the machines would be relocated from the Whitten Oval and the others would be sourced from other gaming facilities in the municipality.

Tatts Group and the Western Bulldogs then mounted a legal challenge to the council objections during 2009 through a six-week VCAT hearing.

The hearing sided with the Western Bulldogs with a 65-page decision, citing a potential “positive social outcome for the emerging new suburb of Edgewater” and spoke of the dissent against the gambling aspect of the project as “more apt for a Government forum” than the issue of the Edgewater site specifically.

The ruling of the VCAT and the claim the site will have a “positive social outcome”, is still contested by Dr. Livingstone, a public health academic who gave expert advice to the tribunal. “My view is that the venue will generate considerable new revenue and is very likely to attract new users to poker machines.”

“Its purpose, built design and location are risk factors for excessive gambling and it will almost certainly significantly increase the level of poker machine expenditure in Maribyrnong, and by a significant amount.”

One of the requirements of AFL clubs to own and hold pokies licenses, is to put numerous social and community projects in place to ‘offset’ the potential harm of owning and promoting EGMs.

Dr. Livingstone was adamant such projects were pointless.

“There is no effective way of ‘offsetting’ the harms of gambling, and certainly not by asserting that a youth program, will somehow make up for the harm inflicted on a host of families by gambling problem.”

The surrounding community appears to be united on the front against the project, with RAIDM (Residents Against Inappropriate Development in Maribyrnong) submitted the signatures of 2,496 local residents to the 2009 VCAT tribunal.

Hartland, the local Greens MP in the Legislative Council, was adamant that the dissent against the project still existed from local residents.

“People who live in the Edgewater estate are still very stressed by it. They believed they were buying into a residential estate, rather than an estate with a social club and live pokies venue.”

“It’s very much not what they thought they were buying into.”

Further setbacks have occurred to the complex, with no opening date in sight.

Pre-construction works, according to this article in The Star, were to begin in late 2011, with a late 2012 opening date. Then, according to the Western Bulldogs Financial Report for the year 2012, the Directors Report on page nine indicates:

“The Club continues to work on the establishment of a new state-of-the-art venue in Edgewater Maribyrnong to replace the Whitten Oval social venue. As such a large project, it has taken longer than originally forecast. At this stage, we are envisaging end 2013 for the opening of the Edgewater venue.”

The Bulldogs have provided no running commentary on the current state of the Edgewater Complex, and a first-hand look at the site as of late July 2013 indicates basic structures have been erected, but an opening date of late 2013 looks incredibly unlikely.

According to one former employee of the club, financials were an issue and the Bulldogs have sought some assistance due to debt that was incurred from delays.

The former employee was adamant that considering the controversy around the site, the Dogs were hoping to announce its opening “modestly”.

According to Colleen Hartland, Bulldogs CEO Peter Gordon had made indicators he was willing to lead the push against the lure of pokies as a revenue raising method.

“Peter, has at least twice in public has said it is time for clubs to shift away from pokies. He has said, whilst Footscray can’t do it on their own, there needs to be a re-think.”

Dr. Livingstone was adamant that this process would take a large amount of time and community rallying to get current policies to change.

“The problem is that the clubs are engaged in something of an arms race to generate revenue for facilities, training resources and coaching staff and support staff.

“Because of the involvement of Bruce Mathieson for example, Carlton has multiple poker machine venues at its disposal with significant revenues available as a consequence.”

He warned that the AFL was headed into the territory the NRL was in regarding clubs owning large amounts of poker machines.

“Collingwood and Essendon also generate big dollars from their venues. It’s hard to see how less financially robust clubs like the Bulldogs can compete against these resources.

“I don’t think the AFL is very relaxed about the poker machine arms race, but they need to take a stand on it and make sure the AFL doesn’t end up with the same image as the NRL.”

The AFL, Western Bulldogs and Peter Gordon were contacted with written questions and all respondents declined to make any comment on the subject of the Edgewater Complex. The other clubs were contacted to speak on ownership of Electronic Gaming Machines and gave no response. 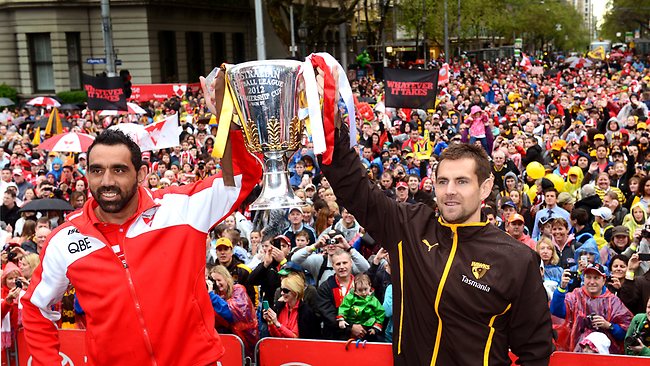 Ben Cuzzupe - 28 September, 2012
0
That everything, the ultimate, that one day in September, is upon us. Many never make it to see a Grand Final. They professionalise every facet...

My life as a female footballer