The AFL’s great enigma was at their volatile best again in 2015, as the bowed out at the preliminary final stage for the second consecutive year.

The fluctuating form of Brad Scott’s side was in full force during a year where the stumbled on opening round again, got smashed by a beleaguered Gold Coast while peaking where it counts to win two crunch finals against the Tigers and Swans.

They won five straights game from round 15 to 21 but only had six wins up to round 14 and an average first half of the season ultimately cost them a chance at a top four birth and smoother passage in September.

In the eyes of some, another successful finals run masked a few of the issues at Arden Street while others praised the way North’s experienced side handled the high-pressure stakes of finals football again.

What it a good season? Definitely. But one has to wonder how many more gears the current crop of players has to go up considering their somewhat erratic form in the regular season.

The North forward line was at their potent best in 2015 and, most importantly, stood up when it really counted.

The knock on the Roos in 2014 was their lack of goalkickers beyond Drew Petrie but bringing in Jarrad Waite and Shaun Higgins eased the burden significantly, with five players kicking more than 30 goals in the season.

The improvement of Ben Brown was a huge positive for North fans and at just 23, he will become a pillar in any future flag prospects if the current crop fails to deliver the premiership they so desperately crave.

North Melbourne came third in contested possessions and no other side took more contested marks than they did in 2015.

It points to a rigid game style that holds up when it really counts. By making another preliminary final, they proved to the football world that they have what it takes to be there when the whips are cracking. The question now becomes what they have to do to take that next step.

It’s hard to pinpoint any major issues at North Melbourne in 2015 but there are a few things they’ll have to fix in 2016 if they are to take the quantum leap towards a grand final birth.

The slow start cost them dearly and they were never really able to make up the ground in the second part of the year.

The wild mood swings that most know North Melbourne for were apparent again and no more in their humbling 55-point loss to the Suns at Metricon Stadium. The Roos also tended to lose a grip of games, allowing their opposition to stack on multiple goals on which took a large chunk out of their percentage. If they are to take the next step in 2016, they can’t be losing by 73 points to the Dockers, allowing the likes of Collingwood to pile on a 13-goal second half like they did in round nine.

It was a year of extremes at North and while it didn’t de-rail their season, there was a lot to ponder for Brad Scott come the end of the year.

The major piece of news to come out of North Melbourne in the trade period centred on speedster Jed Anderson. Having played just 10 games at the Hawks over three seasons, he left for Arden Street in search of more game time.

Meanwhile at the draft, they brought in long-term forward prospect Harry McKay, midfielder Ryan Clarke and defender Corey Wagner, amongst others. They also added former Bulldogs and Saint Farren Ray.

Season 2016 looms as a crunch year for the Roos. A stunning finals series last season masked a Jekyll and Hyde premiership season and if they harbour aspirations at taking the next step this year, a top-four finish is a non-negotiable.

Among a few issues Brad Scott will need to address, disposal efficiency is right up there. Going at 73.4% last year (seventh-highest in the league), it limited North in playing their ballistic game plan. With rotations being capped at 90 from this season, players should fatigue quicker and such, it’s shines a light on a problem that North simply have to fix.

It’s not just a team thing though, because all the building blocks are there in midfield to drive this side for a serious premiership tilt. Everyone in football knows what to expect from blue-chip midfielder Andrew Swallow but what of Jack Ziebell? He remains on the precipice of a genuine a-grade footballer and if makes the jump, you get the feeling the rest of the side will follow.

2015 was a year where Ziebell played every game at an average of 19 disposals, four marks and six tackles. While those stats are more than admirable, he went at just 60% efficiency, a problem that he’ll need to correct. Ziebell’s a midfield beast but better use of the football would make him one of the league’s premier midfielders.

In a year that promises to be one of the more competitive in recent memory, Brad Scott’s men need to be careful they’re not at the receiving end of a season that is that close it will spit out a few good sides out of the eight.
They remain the second-most experienced list in the side while having a squad that has played more games than any other in the league. The premiership clock is ticking at Arden Street and this looms as a pressure-cooker year for the Roos.

A little less grunt and a little more finesse in the engine room and you never know, this could land up being the year of the Roo.

Predicting a position for any side in a season that looks as close as this is fraught with danger and even more so with a team as unpredictable as North. At worst, they’ll rise marginally from their eighth-place finish of 2015 but in a year like this, it may make it difficult for them to climb into the top four. They have the welcome problem of more than a few capable players that don’t make the above best 22. The likes of Ryan Clarke, Kayne Turner, Mason Wood, Taylor Garner, Farren Ray, Majak Daw and Robin Nahas all can do a job at this level and will see game time as injuries inevitably happen. Could that be the difference between a lower eight finish and taking the next step in 2016? We’ll have to wait and see. 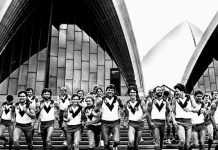