Geelong have seemingly been at the end of their era for the last five years. After being belted by Collingwood in the 2010 preliminary final, most people said it was the end of the great Cats sides that had won two flags. Little did they know, they would win another the following year.

If Geelong were in Game of Thrones, they would be Beric Dondarrion – an entity that you keep thinking is dead, but rises to life again, almost better than ever. This year they’ll again be up there, whether they can snag another flag is yet to be decided, but they should certainly be playing finals.

It’s hard to look past Mitch Clark as the story of the summer. We all know how close he was to signing with the Pies, but instead he joined the Cats and has given Geelong supporters renewed hope for this season. Just getting out on the park is amazing enough, but to perform the way he has this preseason has been nothing short of sensational.

While many Melbourne supporters might be feeling sick to see him dominating in blue and white hoops, anyone able to perform in their job after suffering a serious illness should be applauded for their efforts.

I think a benchmark for Clark this year will be just to assist Hawkins and if he can kick 30 odd goals, then he’ll be a dangerous player in 2015. Aside from his mental demons, Clark has also had interrupted seasons through injury so he’ll be hoping his body and mind can both stay strong throughout the whole season.

Geelong have got something you just can’t buy: finals experience. While a number of their players have one foot in retirement, they have enough about them to go again in season 2015. As mentioned prior, you just can’t seem to write them off and that is the case this year.

Another area in which they excel is team cohesion. From the defenders through to the forwards, Geelong players know their team structure, what coach Chris Scott demands of them, and more importantly, how to win. They seem to pull wins out of nowhere and while on some occasions, opposition fans question certain umpiring decisions in close games, Geelong just refuse to die.

Many critics said they won a lot of tight games and that they would be found out in finals. Unfortunately for the Cats, they were, going out in straight sets to North Melbourne in the semi-finals. They’ve added a couple of players over the off-season, with none more important than Mitch Clark, however Rhys Stanley may also be another handy acquisition as the third tall/relief ruck.

The area that Geelong have tended to be exposed on over the past few years is in the ruck. Ever since Brad Ottens retired, the Cats haven’t been able to have a dominant ruckman who has managed to stay out on the park.

If Hamish McIntosh can stay fit, he’s a very good get, but Dawson Simpson has also shown glimpses. Mark Blicavs runs like a midfielder, but doesn’t have the body to dominate against the best rucks. They also have Padraig Lucey who will be a project player in that role.

Other areas to improve will be to see how they cope with the older players against the younger talents coming through the ranks. If Jimmy Bartel or Corey Enright start to have a dip in form (albeit it’s unlikely) do you elect to play a second or third year player who has been dominating in the VFL over them?

Chris Scott has done very well at maintaining a high success rate and staying in finals while bringing in youth. This year, unlike some others, there will be some serious questions asked of older players and Scott will need to make a gutsy call, much like he did with Paul Chapman.

Geelong, like a fine wine, has been getting better with age. But there comes a time when certain wines are put back into the storage locker for newer blends and this may be the case with a number of Geelong players.

In 2015, it’s hard to see the Cats not being competitive and with some strong acquisitions over the off-season and improvement from younger players, one can expect they’ll feature in September again.

This year the Cats should again find that fourth to eighth spot on the ladder and be that team that no-one particularly wants to play when the whips are cracking in finals.

Akash Fotedar - 23 March, 2014
0
At just 20 years of age Xavier Ellis was a premiership hero. The classy left-footer starred with 28 disposals and a goal as Hawthorn...

Whitfield the cream of this year’s crop 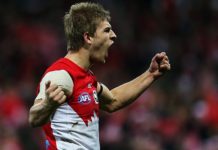